The notion of wandering had a spiritual dimension for Wordsworth. He believed that nature breathed the spirit of poetic inspiration and he often composed his poems while walking. He refers to himself as a pilgrim–i.e., a religious wanderer–in many of his poems. Moreover, it seems as though all the “wise men” in Wordsworth’s poems are wanderers: the pedlar in “The Ruined Cottage,” the leech-gatherer in “Resolution and Independence,” the narrator of his long poem “The Excursion” (notice the implication in the title) who’s referred to simply by the epithet The Wanderer.  Since the only definite thing on my itinerary today was to drive from Llandogo in southeastern Wales to Frongoch in northwestern Wales—about a four-hour drive according to Google maps—I decided it would be a day for wandering.

I drove away from the guest house in Llandogo at 9:00 in search of the only launderette within a 30-mile radius, in a town called Monmouth, on the English side of the border in Gloucestershire. 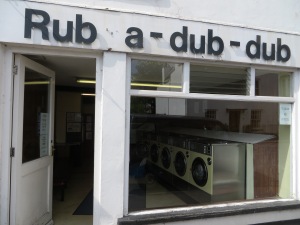 I said to the proprietor, who bore a resemblance to the actress Margo Martindale, “I’m from the U.S. and I’ve never done laundry in the U.K. Can you help me?”

She was more than happy to dispense change, provide soap, and show me how to set the machines. We talked a little as I waited. She asked me where I was from and where I was going. She asked if I’d been to Tintern Abbey.

Like everyone I’ve met this week, she complained about the heat. The U.K. is undergoing a heat wave at the moment. 85 degrees actually feels pretty good to me, but the real problem is that no one has air conditioning, at least not in this corner of the kingdom.

On the way out of Monmouth, I stopped for gas, or petrol as they call it here. As with the laundry, I wasn’t sure of the procedure, so I approached a jolly looking fellow who had a positively Dickensian red face.

“Pardon me, but I’ve never bought gas in the U.K. Can you help me?” When he finished fueling his own car he came over and showed me what to do, giving thorough instructions and taking care to recommend the cheap gas.

When I got back on the road, I headed to Hay-on-Wye because a couple of EA colleagues told me it’s a great place to find antiquarian books. I’m not much of an antiquarian book buyer, but I always like to look, and every once in awhile I find something that interests me that I can afford.

Hay is a small town on a hilltop surrounded by rolling hills squared off into wheatfields and sheep pastures. I arrived about noon and parked in the village’s only car park. I had a map pinpointing the locations of the town’s dozen or so booksellers (furnished by a bookseller in Tintern whose shop I’d wandered into yesterday), but I somehow got lost. Just at that moment, a couple in their early sixties was strolling by—always a safe bet when you want reliable information—so I politely asked them to help me find the poetry bookshop. Their eyes widened in pleasant surprise. I think the fact that I asked for the poetry shop afforded me some credibility.

“Oh, we’re headed that way. You can walk with us.”

They asked me how long I’d been in the U.K. and whether I was enjoying myself. I in turn asked them when and how Hay-on-Wye came to be a mecca for antiquarian booksellers.

“A man named Richard Brooks,” the husband replied, “started a shop here in the 60s, and the success of his shop drew others.”

“And where have you been so far?” the wife asked me. I explained briefly about my Wordsworth tour. “Ah, hence your interest in the poetry shop,” she added.

“There it is,” the husband said, pointing to a small shop on the right.

“Good luck with your journey,” the wife said. “It was a great pleasure to have met you.”

I went into the shop looking for the collected poems of the Welsh World War II poet Alun Lewis, whom the American poet Philip Levine had recommended in an interview, and whose poetry is unavailable in the U.S. I did find a copy of Lewis’s collected poems, but it was a bit steep at 45 pounds. There were several editions of Lewis’s original published works. One of them was in hardback with an introduction by Robert Graves and inscription by G.B. Shaw! (i.e., it had been in Shaw’s library). A steal at 25 pounds! I bought it.

Before I got back on the road, I stopped for some fish and chips and a Coke at Terry’s Take Away and sat in a little park by the poetry bookshop to eat them. People around here often wrinkle their noses at the notion of take away fish and chips. For the first few bites, I couldn’t understand why. After that, it became all too clear. (In fact, I decided to forgo dinner tonight—that’s the degree to which the lunch destroyed my appetite.)

About ten minutes out of town, I spotted a hitchhiker, a bearded young man with a backpack and wearing the kind of leather hat you’d find people wearing in the Australian Outback. He held up a whiteboard slate asking for a ride on A470 north. I was taking A470 virtually all the way to my destination. I drove past about 200 yards. Then I decided to pull over.

I watched in the rearview mirror as he jogged up to the car and got in.

“Tom.” We shook hands and I put the car in gear.

“I’m going to Bala,” I told him, “but I can drop you anywhere along the way.” Bala was about two hours away. He did some brief calculating aloud.

“How long were you waiting for a ride?” I asked him a little later.

“Oh about half an hour out of Cardiff,” he replied, “but only about five minutes before you came by.”

He told me he was originally from Winchester but was studying for a Ph.D. in literature at the University of Cardiff. He was on a weekend holiday.

I asked him what he was focusing on for his Ph.D., and he told me he was examining Milton’s influence on various 18th Century poets. He mentioned several names, but Lady Mary Wortley Montagu’s is the only one I’d heard of, not because of her poetry, but because she’s the woman credited with originating the smallpox vaccine.

When I told him about my Wordsworth tour, he told me he’d done something similar, walking in the footsteps of Byron in Greece.

“Did you swim the Hellespont?” I asked, referring to Byron’s poem “After Swimming from Sestos to Abydos.” Tom quoted the last four lines of the poem, then he said he wasn’t that keen on swimming.

We talked about Kipling, and when I mentioned that my favorite Kipling poem is “The Harp Song of the Dane Women,” Tom at first said he didn’t really know it and then he quoted the opening stanza.

Later, he offered to recite a Wordsworth poem I barely knew called “On Her First Ascent to Helvellyn.” When I told him I planned to climb Mt. Helvellyn, he sat up.

“Are you a mountain climber?” I asked. He shied off the question but recounted a few of his adventures.

“There’s this thing in the U.K. called the three-peat,” he said, “where you climb the highest peaks in Scotland, England, and Wales in twenty-four hours.” This includes driving time. He’s done it twice, the last time with eight of his friends.

“Oh, so you’ve climbed Mt. Snowden,” I said. “I’m planning on doing that tomorrow. That’s why I’m staying in Bala.”

Later I asked him, “How long did it take you to climb Mt. Snowden?”

“About four hours,” he replied. I blinked. The trails vary, but the average time is six hours, and I’m allowing for more if necessary. “But we got a little bit lost,” he continued, “because it was dark. When you do the three-peat, you inevitably end up climbing at least one peak at night.”

More time passed before I followed up on this conversation. “So what was the low moment?” I asked.

“I figure there must have been a low moment during the three-peat. You know, that moment of doubt or trial.” I thought for a moment. “I know. I bet it happened in the car.”

Tom laughed. “Yeah,” he replied, “it probably hits right when you get to the last peak at 2:00AM.”

“I can imagine,” I said. I thought of Napoleon’s saying that he wanted his generals to have “three o’clock in the morning courage”; that is, the ability to carry out the most difficult orders even in the dead of night.

Somewhere along the way, we’d made a wrong turn. Tom had a detailed map, but he was following my notes I’d scribbled in my journal from the internet. I’d written down “go left” when we should have gone right. Maybe I wrote it wrong. Maybe Google maps was wrong. In any case, we found ourselves heading west rather than north over the Cambria mountains. I sucked in my breath as we drove. It was a landscape of staggering beauty.

“Are you experiencing the sublime?” Tom asked jokingly, or maybe only half-jokingly.

“I’m starting to,” I replied. I stopped to take some pictures.

When we got going again, Tom found where we were on the map. The best solution was to keep pressing on towards Aberystwyth on the coast and then double back in a northeastern route to Snowdonia.

“Sorry about this,” Tom said.

Every once in awhile, Tom would explain the Welsh names. Cwmystwyth means river (cwm) of ystwyth. Aberystwyth means town (aber) of Ystwyth. I didn’t ask him what ystwyth means, but I’m guessing it’s the name of the person who founded the town.

It sprinkled rain as we drove through Cambria, but we descended towards the coast in full summer sunlight. We arrived in Bala shortly before 7:00. All in all it had been a five-hour drive from Hay-on-Wye. I dropped Tom in the center of town.

“Good luck with your Wordsworth journey,” Tom said to me as he shook my hand. I watched him turn and head off down the main street. We were two pilgrims who’d found each other wandering on the road.

The Rhydydefaid Farm B&B (pronounced “ridifid,” the name means “sheep-ford”) is just a few minutes from the center of town. The proprietor proudly told me that her ancestors traveled to America in 1684 with William Penn, and she showed me the plaque she’d received when she and her family journeyed over for the tricentennial in 1984. 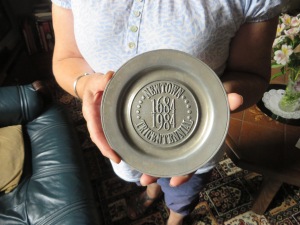 She set up a tray of tea for me at a table in the garden.

As I drank my tea, I could hear the rushing waters of a nearby brook. For the moment, everything else was still.

3 thoughts on “The Wanderer”